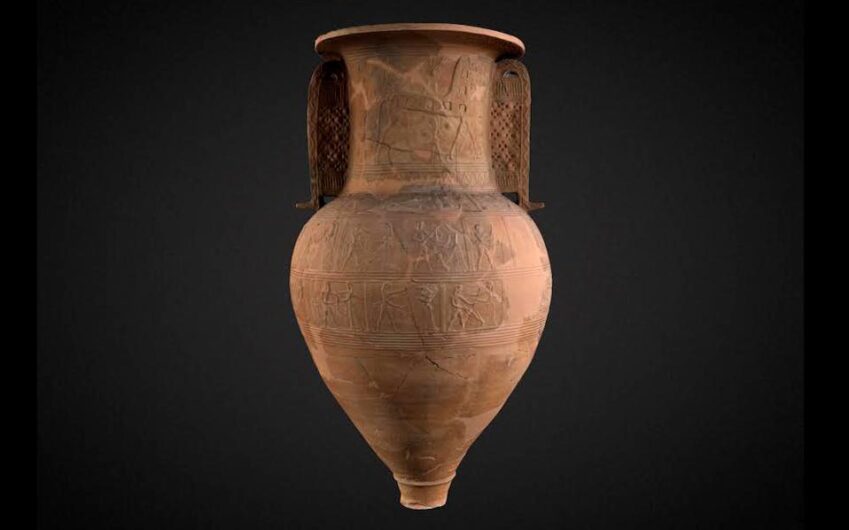 THE MYKONOS VASE & THE HEROES OF ELEUTHERNA

In the summer of 1961, the opening of a cistern at a house in Mykonos revealed a surprise: a funeral vase with impressive inscribed decorations and with human bones inside. The vase, which dates to approximately 670 B.C., became known as the “Mykonos Vase” and is one of the most important works of its time thanks to its graphic depiction of the Fall of Troy.

This vase today represents one of the most important artifacts on display at the Archaeological Museum of Mykonos. In the Proto-Archaic period when it was produced, the Homeric and Cyclic epics which were then being composed reflected models, customs and events from an earlier time –
which nonetheless continued to be relevant as a source of inspiration for poets and artists. The decoration on the Mykonos Vase, which covers only the front side of the neck and body, is distinguished by the extraordinary beauty of its composition, characterized by a delicacy in rendering forms and great attention to detail. Besides the Trojan Horse and the 14 Achaean warriors shown on the neck of the vase, there are also 19 scenes depicting the slaughter of the children of Troy and the abduction of the women as spoils of war – in panels arranged in three successive bands on the body of the vase. Women play a central role in every scene shown on the vase, and it is they who bear the pain and suffering caused by the exploits of the male warriors who they themselves once bore. The great tragic poets likewise have women narrate the calamities of Troy in such tragedies as “The Trojan Women” by Euripides (415 B.C.).

To celebrate the Mykonos Vase and the discovery of stone shield-bearing warriors in Eleutherna, Crete, an exhibition entitled “Homer in the Aegean” is being organized for 2017. The introductory first part of this exhibition, which is called “The Fall of Troy: The Mykonos Vase and the heroes of Eleutherna” will be presented at the Mykonos Art Gallery from the 22nd of July through the 11th of September 2016. This exhibition will host unique audiovisual

Under the Auspices of H.E. The President of the Hellenic Republic, Mr. Pr. Pavlopoulos

View all events
© CINE MANTO MYKONOS 2022 | DESIGN BY SPECTER DIGITAL
Centre for fashion enterprise Find out more
We use cookies on our website to give you the most relevant experience by remembering your preferences and repeat visits. By clicking “Accept”, you consent to the use of ALL the cookies.
Cookie settingsACCEPT
Manage consent